Duration: About 2 hours (more if you explore) 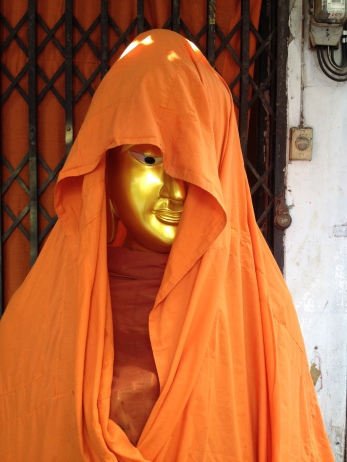 Once you get to National Stadium BTS you have a few options. If you have shopping fever then head to MBK on the southern side. If you have an art craving you can walk from the BTS into the Bangkok Art and Culture Centre which opens at 10am (closed Mondays). But if you are just walking take the left hand side exit (Exit 2) and continue your journey up Rama 1.

Within about 200 metres you will see the National Stadium on your left. The area is a large sporting complex and the original stadium – Supachalasai Stadium, was built in 1937.

Roughly opposite is Jim Thompson’s house at 6 Soi Kasem San 2. Worth a visit if you have the time. The footpaths here are quite wide so it is pleasant walking in company. After about 400 metres you come to Th. Banthat Thong intersection. Cross the intersection and keep heading west. On the right hand side at the intersection you will see a 2013 mural by Amandine Urruty, a female artist who….lives and works on her bed, with a suit case full of pens always nearby. After studying at University for long years and a brief career in underground music, Amandine Urruty spreads her repertoire of beasts and her gallery of weird characters on all kind of mediums, on paper as on walls. As she masters techniques of traditional drawing, Amandine Urruty offers us a cheerful gallery of deviant portraits, associating grotesque outfits with baroque decorum which miraculously reconcile lovers of alchemistic symbolism to young ladies with too much make up (from her blog). It’s a collaborative work with Nicolas Barrome, another French artist. 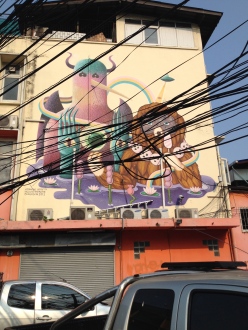 Continue along Rama 1 and you will walk under the expressway. On the left is the Pathumwan Sports Club where you might catch a glimpse of Muay Thai aspirants practising their craft. As you continue down Rama 1 you see Wat Sam Ngam on the right. The Chinese inspired filigree work on the pavilions and murals inside are worth are seeing. To see the murals, enter the wat and take your first left.

Within meters of the wat is a bridge over the northern railway line. Rather than walk directly over the bridge, walk down to the small community on the right hand side. Note the small outdoor library and play centre for kids sheltering under the lip of the bridge. At the end of the street there is a small Chinese temple and steps back up onto the bridge. 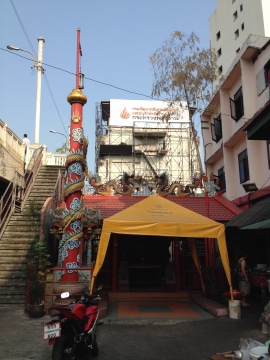 From the bridge you can see the rear of the old railway buildings within the Hualamphong railway complex. Most recently the interesting inner-courtyard of these buildings was used for a pop-up market.

It’s a short distance to a khlong which wends its way down to River City (the start of Walk 3). Just before you cross the bridge however, look back to your right to see a fine example of early 20th century architecture housing a section of the Ministry of Energy. There is an intersection on the far side of the khlong with, thankfully, an overhead bridge to avoid a tricky ground level crossing. It’s at this intersection that Rama 1 becomes Th Bamrung Mueang (which means ‘road embellishing the city’). For a fascinating sketch of the road’s commercial history see: Th. Bamrung Mueang’s history

Coming from this walk’s direction you will pass an assortment of businesses including traditional medicine, hardware stores, glaziers, hairdressers (the road was the site of the first barber shops in Bangkok) although office furniture seems to be at the heart of it. Then again, it also has a great Vespa sales and repair shop as well. The footpath is wide and the walking is easy. 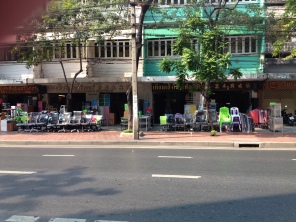 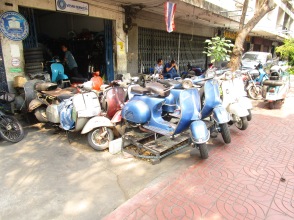 You will also pass on the left hand side, what looks to be a deserted French Second Empire style building optimistically called European Town. A dream gone wrong somewhere. Just crying out for a hipster makeover. 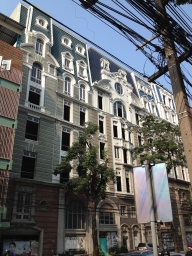 What I like about this part of town are the tree-lined streets that add colour, beauty and most importantly, at time of writing, shade. Continue along Th Bamrung Mueang and at the next intersection (Th. Worachak) you will see the old Bangkok Waterworks. The project was started by Rama V although he didn’t live to see it completed in 1914. 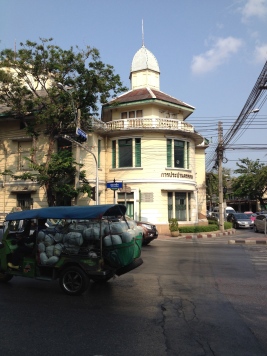 Just after the Waterworks on the left hand side you will come to Soi Ban Bat. This community was established by Rama 1 and here lived artisans whose speciality was the making of alms bowls for monks. Much diminished these days, there are still some people working on the craft in the alleyways off the Soi along with other assorted small businesses. Take the first alley to the right once you have entered the soi. Apart from seeing traditional baat (alm’s bowls) you will find yourself amidst a vibrant community. Lots of grandparents looking after grandchildren. 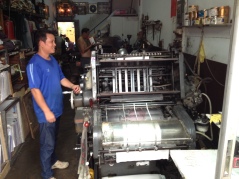 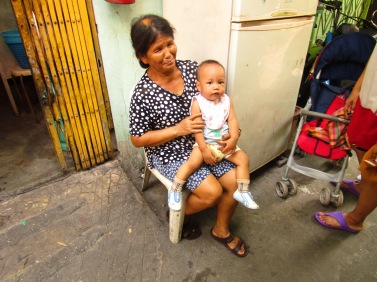 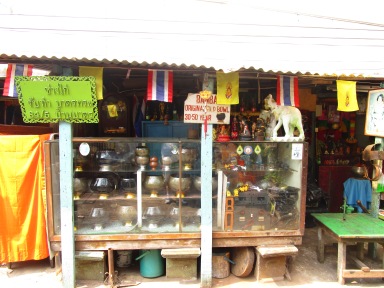 Over to your right is Phu Khao Thong – the Chedi of the Golden Mountain. Now commonly known as the Golden Mount. A project started by Rama III, it was completed by his son Rama IV (of the King and I story). On this walk you can continue a short way from Soi Ban Bat to the interaction with Th.Boriphat. Take a right and walk about 100 metres until you come to what is a kind of back entrance to the Mount. Enter and follow the internal road to the right until you come to the ticket office.Explore the Mount at your leisure. Just before the office, however, is what I’m claiming to be the world’s biggest mortar and pestle. That’s my trusty orange pen in the frame.

Of course, if your desire runs more to inner carpenter rather than inner peace, you will have noticed on the far side of Th. Boriphat running parallel to the Mount’s wall a row of timber shops selling everything in the world of joinery. While away the hours!

Behind these shops runs the outer-khlong of Rattankosin island. Cross the bridge and at the intersection of Th. Maha Chai you will need to cross to the left hand side of the road as the footpath disappears on the right. If you look ahead, about 300 metres away, you will see the Giant Swing.

At this point,  turn right and head towards Mahakan Fort. Lots of tasty looking food on the right hand side of Th. Maha Chai late in the day. Shortly you will cross a khlong and just after this is the entry into the Mahakan community. This community is under imminent threat from the Bangkok Municipal Authority who wish to pull it down and make it a park. The community is fighting back and welcome visitors. Like the Ban Baat community previously, take your smile and use your Thai.You can also stock up on fireworks for that special occasion. 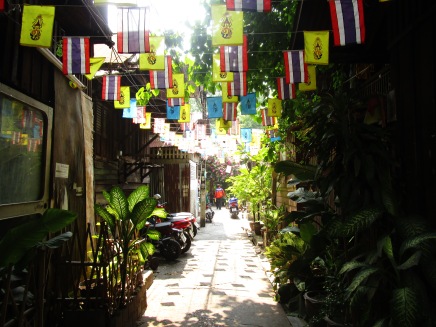 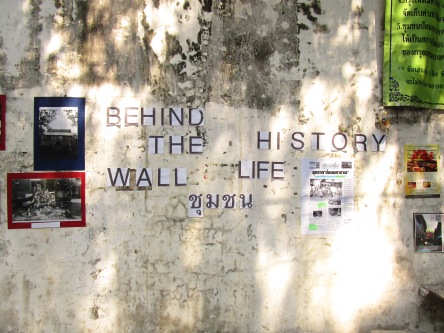 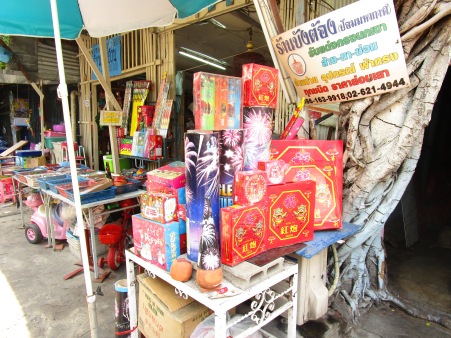 After visiting this community return to the intersection and rejoin Th. Bamrung. On the right hand side are old two story shop-fronts but on the left starts a row of shops selling an amazing array of Buddhist artefacts (sanghapan). See the earlier link for information on the shops. 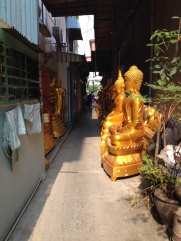 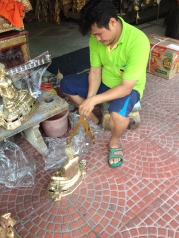 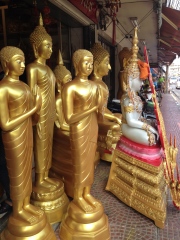 At this point Th. Bamrung Mueang widens out with the centre piece being the Giant Swing. This was originally built in 1784 by Rama 1 and moved to its current location in front of Wat Suthat in 1920. Renovations took place in 2005-6 with some massive teak trees from Phrae, in Northern Thailand. On the right is LanKonMueng – an open space in front of the City Hall where people often gather in the evenings for various outdoor activities.

Follow Th. Bamrung, leaving the central square and on your left, down a small alley, you will come across Ban Mo Waan, a Thai / Chinese herbalist shop that has been in business for generations. A little further on, again on the left, is the Trok Mo market which is worth a wander.

You could go on, but for this walk, retrace your steps and enter Th. Dinso. This road got it’s name from earlier times when it was the go to street for stationery – the Thai word for pencil is ดินสอ (dinsor). Walk down the left hand side and like other roads in the area it is shaded by trees. Immediately on your left you will see the Devasthan Bosth Brahmana – this temple was built in 1784 and houses the giant plank that served as the ‘seat’ of the Giant Swing. Continue along Th. Dinso. Off to the left are intriguing alleyways where rays of sunlight target different parts depending on the time of day. 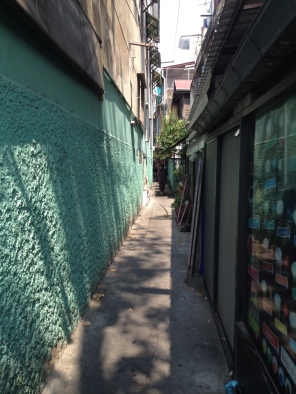 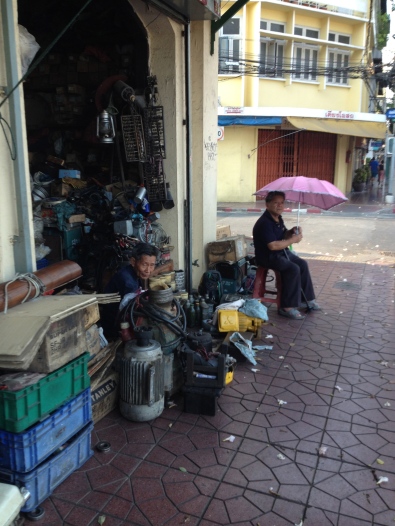 Many people come here for the food – so, depending on the time of day it might make for a good lunch break. http://www.eatingthaifood.com suggests that Mit Ko Yuan, at 186 is one of the best restaurants in Bangkok. It opens for lunch at 11am and dinner at 4pm. My lunch of glass noodles and chicken cost 40 baht. 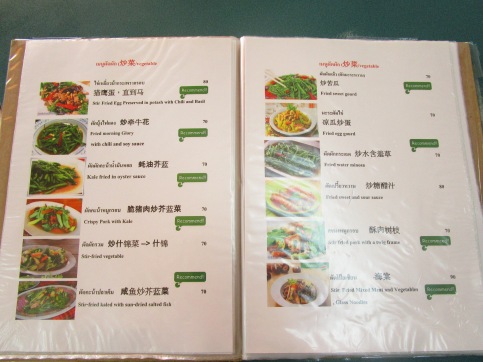 Walk on and you will cross Khlong Wat which connects the inner and outer moats of the old city. A little further and you come to Th. Ratchadamoen and the impressive Democracy Monument. Th.Ractchadamoen was completed in 1903 after a visit by King Rama 5 to Europe. It connects the old palace to the new. As Thailand’s military government under Gen. Prayut Chan o Cha seeks to muzzle any discussion about the pros and cons of the new Draft Constitution in 2016, this place echoes with the events of October 6 – 15th, 1973 where there were at times, an estimated half a million protestors against the then military government and frustration over the early promulgation of the constitution. It’s is interesting that the Red Shirt protests of 2010 decided that Ratchaprasong was more symbolic a place than Ratchadamoen.

The Democracy Monument itself was constructed in 1935 by the People’s Party Government and is based on dimensions stemming from the numbers of the date 24.6.1932, when the Monarchy became a constitutional one after a bloodless coup.

From Th. Dinso turn left into Th.Ratchadamoen and pause to look at the now aging Art Deco buildings designed and built to reflect the new modern and democratic Thailand.

Walking away from the Democracy Monument, enjoy the wide footpath and shady trees, and on the left you will pass a smorgasbord of lottery tickets – all carefully chosen by systems and signs people have carefully made note of. My own approach is to count gecko calls in the evening to get my numbers but I haven’t won anything yet .

A little further on you will come to the Th. Tanao intersection. Cross Th.Ratchadamoen here and you will see the newly opened Bangkok City Library.

A little further on you will see Th. Khao San over to your left off Th. Tanao. Wander along Th. Khao San for all your tattoo, Rastafarian, Thai fisherman’s pants, tickets to Koh Tao (and anywhere else), cold beer, begpackers, and a passing parade of new arrivals, departees and wanderers.

At the end of Th.Khao San turn right. Walk along the left hand side of the road until you come to the intersection of Th. Pra Sumen – a road that follows the outer moat of Rattanakosin Island (called Khlong Bang Lamphu at this point). Continue walking towards the khlong and start across the bridge. Good views here of the waterway in both directions. Look back to the left and on the bank you can see some recent street art. 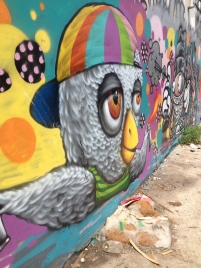 Just over the bridge, again on the left hand side, you will pass one of the smallest and best blues bars in Bangkok – Adhere 13. You are now on Th. Samsen and about 20 metres on you come to a Soi on the left. On the corner is your destination for the walk, Chomp cafe and art space. Good food and regular art exhibitions upstairs. The gallery specialises in young and emerging artists, especially street artists. Look at the cafe’s side wall facing the soi for a recent collaborative work. 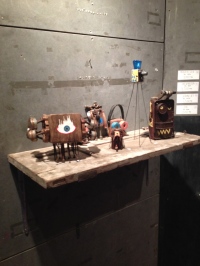 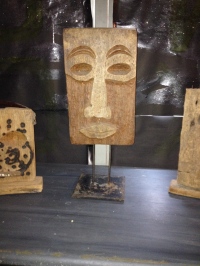 This entry was posted in Architecture, Art, Eating, History. Bookmark the permalink.